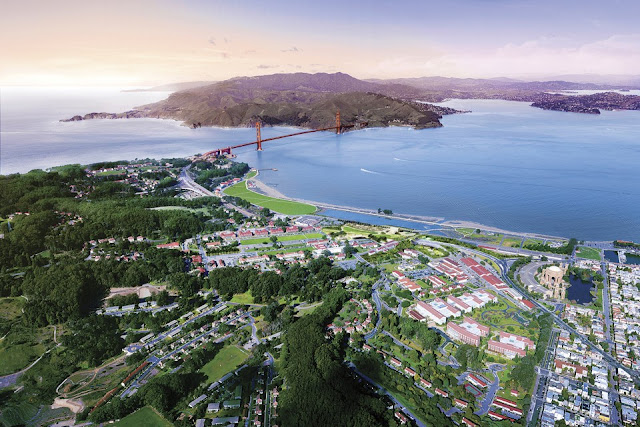 A rendering of the forthcoming Presidio land development.

The city is transforming an old, major road into a new public park.

When the Golden Gate Bridge opened in 1937, the road leading to it, a hulking viaduct of concrete and steel known as Doyle Drive, split the northern tip of San Francisco in two, cutting right through the Presidio, the U.S. Army base that guarded the mouth of San Francisco Bay. For as long as the Presidio remained a base, the land’s division into two pieces wasn’t a huge problem.
But in 1994, the Presidio was decommissioned. The land has since been turned into a national park, and the buildings on it have been redeveloped as housing, restaurants, offices, art spaces, and more. With the Presidio thus transformed into a very public place, the fact that it was cut off from the nearby shoreline suddenly mattered much more. As it happened, Doyle Drive was in need of replacement, owing to a number of design flaws and damage from the 1989 Loma Prieta earthquake. This provided an opening to rethink the road’s role in the landscape. Various road-centric plans were initially considered, but it was an idea from a Bay Area landscape architect named Michael Painter, who proposed surrounding the road with a tunnel and then covering the tunnel with parkland, that garnered the most support.
“It’s created an incredible opportunity for us to stitch the two halves of the park back together,” says Michael Boland, the acting executive director of the Presidio Trust, which manages the park. The Doyle Drive replacement, completed in 2015, is tucked inside concrete tunnels, the roofs of which will serve as green bridges linking the two sections of the Presidio that were separated in the 1930s. (An existing surface street, Old Mason Street, still runs parallel to the shoreline, but is easily traversable by pedestrians and bicyclists.) The top of the now-covered road and the surrounding area will be landscaped by James Corner Field Operations, the landscape-architecture and urban-design firm behind New York City’s High Line. In the end, the Presidio will gain 14 acres of newly developed park space.

Putting parkland over roads is an appealing way to squeeze more public space into crowded cities. “Many parks these days are being built on brownfield sites or over roadways or on land—or in some cases above land—that historically you wouldn’t think of as suitable for parkland,” Boland told me. In Dallas, for example, the 5.2‑acre Klyde Warren Park opened in 2012 on a platform over a sunken section of freeway. Los Angeles and Seattle are now considering similar freeway-cap parks.
Corner’s design features a terraced landscape that climbs from marshlands along the shore up to gently crowned tunnel tops, where a series of lawns, meadows, and sweeping pathways are interspersed with small gardens and nooks that block the breezes off the water. The new ground over the tunnels will be about 30 feet higher than most of its surroundings, offering heretofore unavailable views.

“When you step out on the tunnel tops, you really get a 360-degree, geographical sort of centering vantage point where you can take in every landmark and every place that’s significant in San Francisco and the bay,” Corner told me, ticking off the city’s skyline, Alcatraz and Angel Island, Marin, the grounds of the Presidio, and, most prominently, the Golden Gate Bridge. “A large part of the design, in addition to connectivity, is really celebrating views,” he said.
The plantings selected by Corner aim to call back to the natural conditions that existed on the site before the road cut through. More than 50 native species of plants collected throughout the Presidio are now being cultivated in its nursery for the park’s landscaping, which is expected to start next year and be completed in late 2018. Various grasses and succulents will blanket the tunnels, and the bluff leading down toward the water will be covered in native shrubs and grasses like those seen atop other escarpments along the edge of the bay. The hope is that these groups of plants will create habitats for the diverse bird, butterfly, and insect populations of the Presidio, as well as a natural refuge for the city’s residents and visitors. What was once a freeway, Corner said, will become, in parts, “quite wild.”