MIT researchers unveiled something earlier this month that will please toddlers and serious urban planners alike. It’s a model of Dudley Square—a neighborhood in the greater Boston area—about the size of a kitchen table. The roads, sidewalks, bus stations, and buildings are all made out of Lego blocks. Wee Lego figures represent pedestrians. Laid over it all is a computer-generated projection of the actual neighborhood, filling in the details of current green space and traffic in Dudley Square.
The project is a collaboration between the MIT Department of Urban Studies and Planning, the Changing Places group at the MIT Media Lab, and the Barr Foundation, all of whom are are using the new tool to test how bus-rapid transit systems could affect the city. The test includes three components, each representing the city of Boston on a different scale. There’s the Lego model of Dudley Square, another 3-D model (also made of Legos) of a Boston street, and a touchscreen interface to illustrate the potential effects of different plans on a regional scale—such as how changes to public transit might affect people’s access to jobs.

The models are all available for the public to explore—and see how their own lives might benefit or suffer from certain plans. On the touchscreen, for example, viewers can point to a specific part of the city and have the computer tell them how many jobs they can get to from that spot via proposed public transportation. They can then fiddle with the model to see how different transit systems and route networks affect their commute.
“And then they can say, ‘Well, what if I added these new transit routes, and what if I change the frequency of the buses, and how much would it cost?’” explains Chris Zegras, professor of transportation and urban planning at MIT, who leads the project team. The information, he adds, come from publicly available data.
On the two Lego components, users can switch out different pieces representing various types of bus stops—from traditional ones to high-tech stations where riders pay before they board—and watch the simulated change in traffic flow directly on the Lego platform. Data about the bus station’s efficiency is also projected on nearby screens.

The aim is to make the urban planning process more transparent by getting everyone involved—not just experts like Zegras. “Part of our idea with introducing these types of tools is to break away from the technocratic model of planning,” he says. “So we’ve try to make a very initial foray into opening up those processes a bit more.” 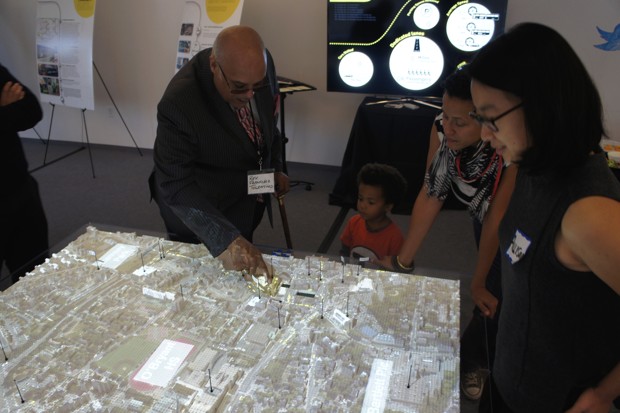 And what’s more accessible and familiar than Legos? “The platform lowers the the threshold of participation because every kid knows how to move a Lego piece,” says Phil Tinn, a masters student at MIT, who is also part of the team.

Over the past week, the researchers opened their lab to the public, inviting both residents and local policymakers to play with the interactive tools. The response so far has been positive, Zegras says. “The interactivity allowed users to see those changes, to play with those changes, and to look at the estimates of what the cost of those changes would be.”
“Our ultimate objective is this idea of co-creation,” he adds. “Having producers and consumers work intimately together in the production of a good creates a better good. We would like that to happen in how we produce 21st century transit systems.”